Trucks are the pinnacle of automotive utility. Whether it’s that heavy commercial job or your choice of vehicle for a camping holiday, trucks pack a big punch when it comes to space and utility. Although we are spoiled with the wide variety of trucks on the market, the Ford F150 is America’s top choice and has been the best-selling vehicle for many years. While the F150 is built for rough and tough environments, there is one part of the truck that usually gets the most pounding, the rear bed!

An open rear bed is exposed to the harsh climate which can damage the bed over time and also leaves your cargo exposed. An open bed also causes air resistance while on the highways, reducing gas mileage and causing unnecessary strain on the drivetrain. This is why a tonneau cover on the bed of your F150 can not only reduce exposure to the elements and secure the contents in the bed but also reduce your running costs. Thankfully there are various types to choose from depending on how you use your truck. We went ahead and narrowed them down for you. Here is a list of the best F150 tonneau covers.

Looking for other external modifications for your ford F150? Check out our F150 leveling kit guide here 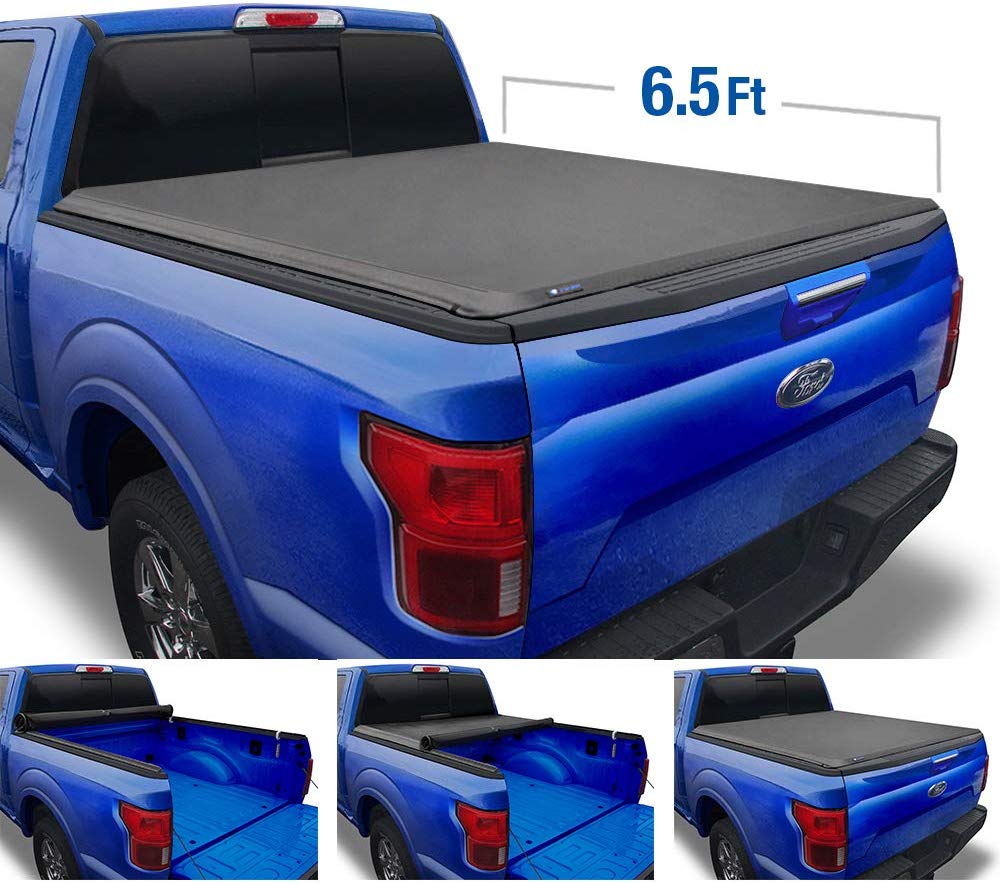 If you are on a budget or use your F150 sparingly, the roll-up Tyger Auto T1 f150 bed cover made of marine-grade vinyl is all you need. Although it’s lightweight and has a soft-touch finish you are not compromising on weather protection or durability. Installation is a quick DIY install and operation is quicker. You can roll it up or down within seconds to access the bed without having to do any heavy lifting. It also comes in all F150 bed sizes.

The Tyger Auto T1 has Velcro strips on the sides and a locking mechanism at the tailgate to seal off your cargo in the bed from the elements. The tension in the vinyl is adjustable to keep it wrinkle-free and the frame is made of aircraft-grade aluminum so those small nudges from your cargo will go unnoticed. The crossbars hidden inside the vinyl keep it from sagging and maintain a smooth flat surface adding to the aerodynamics of your F150, resulting in slightly improved gas mileage. If you are hauling larger cargo, you can just roll it all the way back and securely stack it at the bottom rear of the cab window without hindering your view. The T1 also comes with a limited lifetime warranty in the unlikely case of a malfunction.

While the T1 vinyl is tear-resistant, it does not provide the protection of a hard shell cover against direct hits from your cargo and could possibly result in a tear. Prolonged exposure to extreme weather may cause hardening of the material resulting in damage to the surface. So if you are looking for something more sturdy, check out the below option. Overall for a budget option, the Tyger Auto T1 is a great F150 tonneau cover 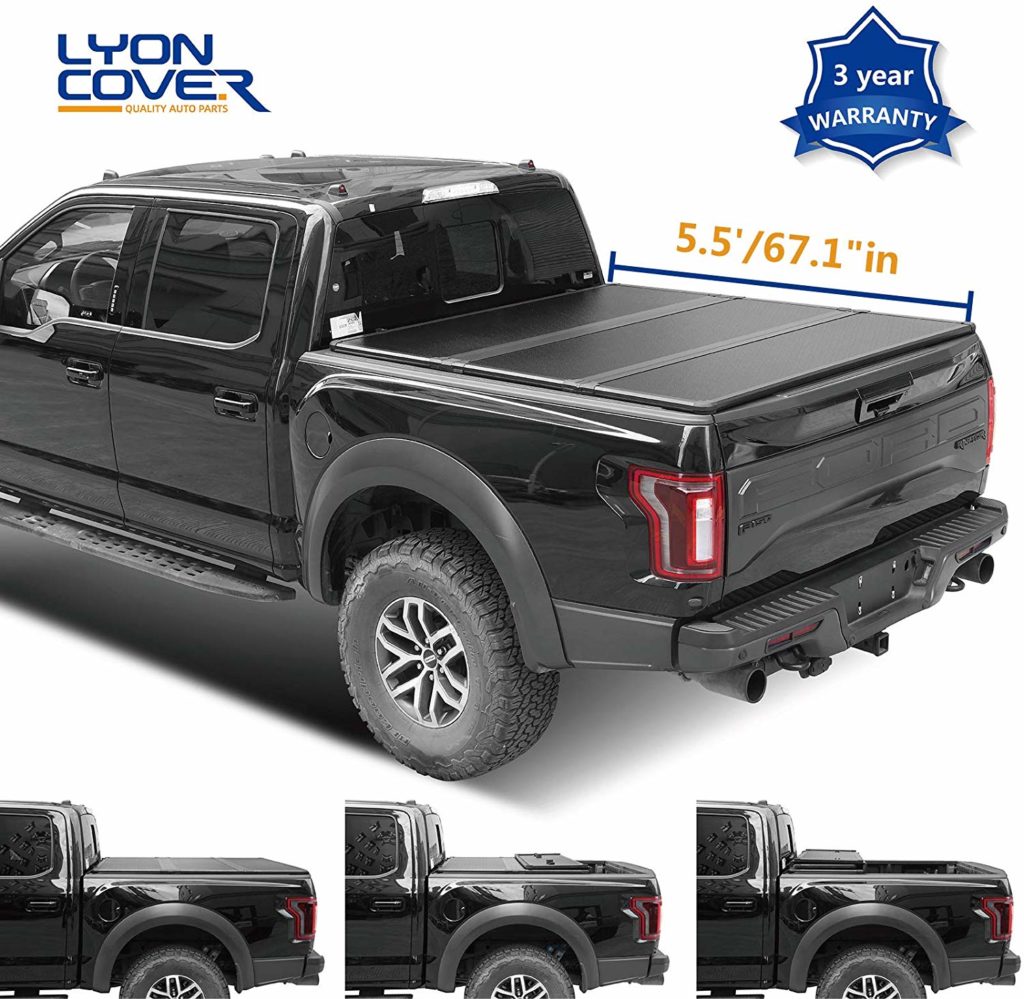 For the F150 power users who requires that extra strength and longer life of a hard shell style tonneau cover, the Lyon Cover impact-resistant F150 bed cover is a great choice. Its trifold system makes it easy to retract and fold it against the back of the cab. The cover has rubber bumpers installed to protect the cab from scratches. Each folding hinge has a locking mechanism to properly secure the whole structure. An LED lamp is included which enhances visibility in the bed at night. It is also completely weatherproof as it has waterproof windproof and snow proof hinges as well as strong leak-free seals giving you confidence about items secured in the bed. The FRP Trifold is available in all F150 bed sizes and installation is very easy requiring no holes to be drilled in the bed.

The top surface has a load-bearing capacity of 350lbs and is dent and scratch-resistant. The electrophoretic treatment makes the surface corrosion-resistant so your hardware will look good for ages. The fiberglass construction also keeps the temperature inside the bed cooler compared to metal ones which means you can leave temperature-sensitive items in the bed.

The hard shell Lyon F150 bed cover does have its limitations though. It is a bit heavier compared to the roll-on one and that might be an issue if you frequent load and unload on shorter trips. Another inconvenience might be that when folded up against the cab, the hardware will restrict the rear view of the driver. However, this would not matter a lot if you have stacked up taller cargo which already restricts your rearview. 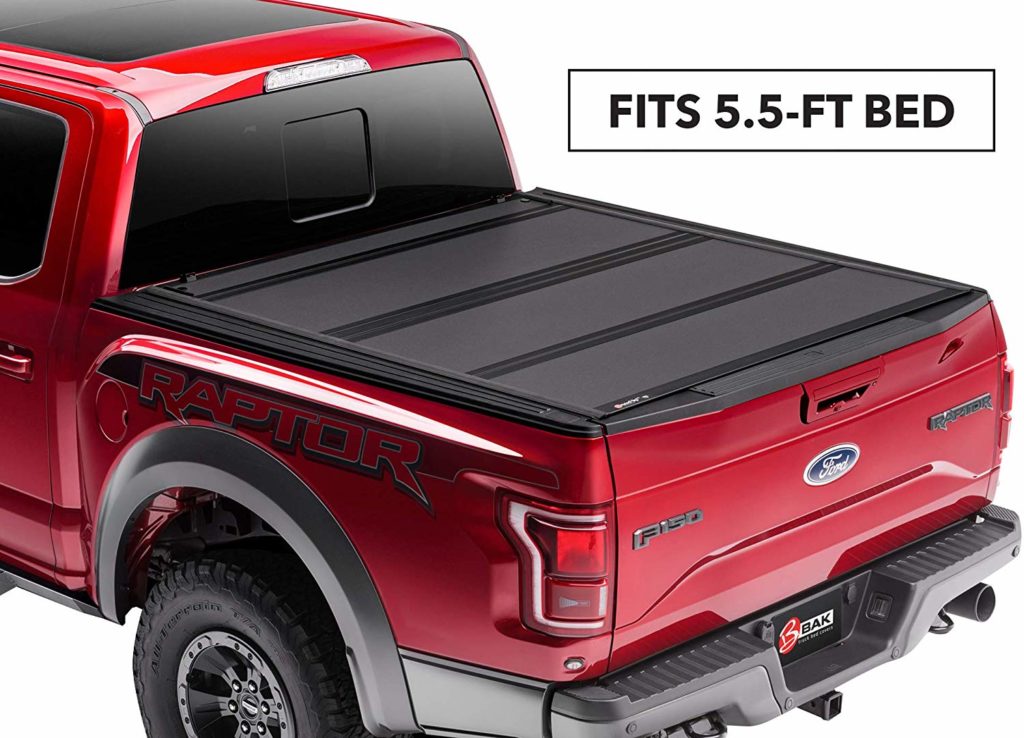 Looking for top of the range durability and performance? Look no further! The MX4 offers the highest grade protection, durability, and security. While it looks sleek and low profile, this is, in fact, a heavy-duty f150 tonneau cover made of aircraft-grade aluminum that can withstand up to 400lbs of an evenly distributed load while guaranteeing complete protection against the harshest climate in the most extreme usage condition. Wait, there is more! The core of the structure is enhanced premium density foam which not only helps with thermal insulation but also absorbs vibrations and noise while on the road. The MX4 can also be had in all F150 bed sizes.

The top panel is a premium matte finished with a UV and scratch-resistant surface that keeps your F150 bed looking new year after year. End caps for seals on the sides have the same finish as the cover, giving a seamless appearance. Once again, Installation is clamp-on and requires no alteration or drilling in the bed. Operating the MX4 is simple as well. It can be unlocked from either side of the tailgate by undoing the high strength latch. The truck bed can be accessed through tailgate even when the cover is in the closed position. While hauling larger cargo, the cover can be folded into thirds and stacked up against the cab and secured in place safely using durable prop rods without using any extra tools.

The only catch here is since the MX4 is such a heavy-duty cover it weights a lot. The MX4 weighs 71lbs and will be a two-person job to fit on to your F150. In the folded position it will also hinder your rearview but to a heavy user, that would not be unusual. All of these features make the BAKFlip MX4 one of the best F150 tonneau covers on the market.